To follow up on my popular Dynamics vs Salesforce: The War From the Trenches, I thought I’d dig a bit deeper into the security models. The models are considerably different and have their own strengths and weaknesses.

When deciding between Salesforce and Microsoft, the security model is perhaps the most important difference. When implementing CRM, who can see what is an enormous time suck and causes a lot of trouble. It’s the bad side of the 80-20 rule – this is the thing that’s 20% of your project but will consume 80% of your time.

In Dynamics, you have user roles, and hierarchy governed by something called Business Units. This means you can implement a clean org-chart security model very easily. The East Region VP sees everything in the New York and Atlanta branches, but nothing in San Francisco. And Johnny Sales Rep in New York can see only his own stuff but not the guy in the next cube’s.

The model starts and ends with ownership of a given record. It’s pretty straightforward: Johnny Sales Rep can edit Opportunities he owns but only view Opportunities he doesn’t, within his level in the hierarchy or below him.

To manage this you have a user role concept, which a user can have many of and are only additive. So if Johnny Sales Rep has Role A that allows him to edit a record, and Role B that wouldn’t allow him to edit it, he can edit it. Usually you can end up with a nice layered approach – a base role then a VP role that adds some capabilities, for example.

Dynamics’ security model has recently been improved to include a managerial/organizational hierarchy that reduces the need for Business Units.

The major weakness of this model is that it is focused on what’s at and below a given user in the tree, which makes it extraordinarily hard to operate cross-functionally. Say your customer GlobalCo is based in New York and is owned by Joe Sales Rep, so it rolls up to the North America unit. But GlobalCo has a branch in Johannesburg owned by Sally SuperSales, so that branch rolls up to your EMEA unit. The fact that they are in different branches makes it very hard for Sally to see what’s going on in New York. And if you have a strategic account manager that needs to see all branches of GlobalCo? Forget it. You’re left with workflows implementing automatic sharing, which isn’t reportable or traceable in any meaningful way, or even achievable using out-of-the-box tools. Addressing this stuff will consume your project budget.

This diagram illustrates what I mean.

The good news is that sharing is applicable to almost anything – you can share individual Dashboards, Views, Reports, etc., in addition to records.

There is a Team concept that is marginally helpful here, but seems to always have one limitation that prevents you from using it.

This model is very clear-cut and it applies everywhere. Run a report, it’s relative to what you’re allowed to see, period.

Salesforce’s model is conceptually complex but in the end is vastly more practical.

First, you need to decide if everyone should see everything. If so, you’re done. Otherwise, it includes three main components:

On top of this you have automatic sharing. In my mind, this is the #1 advantage Salesforce has over Microsoft. You can do stuff like grant a Sales Operations team control over certain opportunities.

You could think of other examples and applications – like maybe, grant an arbitrary group of product managers read-only access to any Opportunities lost to a certain competitor over features.

But this is messy as well. You have to know and keep track of:

There’s no consistent, global rules, like how Microsoft’s user roles are always additive. For example, you could create a Dashboard that shows company-wide data and publish it to the whole company. You may or may not want the ability to do this. Or, Dashboards are only editable by the person who created them.

Like I said in my first blog – everything in Salesforce has an exception.

Popular posts from this blog

"Disjunctions not supported" - Why Custom Metadata and Flow Don't Mix

June 16, 2020
Salesforce has been focusing a lot on Flow recently, as they should. It splits the difference nicely between Process Builder and Apex code. We recently used Flow to implement what I'd expect is a common use case - when a record is created, lookup a value from a table and update the record. In this case, it's a light lead score we call a "fireball" value. This worked great since in most use cases we'd get one record at a time. But we found during Lead conversion, we would get a few records through at a time, which caused the process to break with a really odd error: Error Occurred: This error occurred when the flow tried to look up records: Disjunctions not supported. After some research it became clear that this is the error you get when you try to query a custom metadata table using an "OR" condition. But my Flow didn't use an "OR" condition in the metadata lookup. The answer was lurking in this obscure documentation: When you define mult
Read more

What Happens To "Inflight" Process Builders When You Activate a new Version?

tl;dr : If an individual record is in a "Paused Flow Interview" state, and you create a new version of the Process Builder, the record will "wake up" at its specified time and complete the actions as specified in the version of the PB that was active when the record entered the paused state. There is some confusion as to what happens to Process Builders that have "inflight" time-based actions when you create a new version of the PB.  The information from Salesforce is incomplete and there are contradictory StackExchange answers, including here. At the time of writing, the first answer answers the wrong question, and the 2nd and 3rd answers fully contradict each other. Clearly this is due for someone to just test it. My Test I conducted the following test - I'm going to create a PB, create a test record, and see what happens if I update the PB while the record is pending. One of three things is going to happen: Nothing will happen to the record The re
Read more

Custom Lookup For Flows to Avoid "Disjunctions Not Supported" 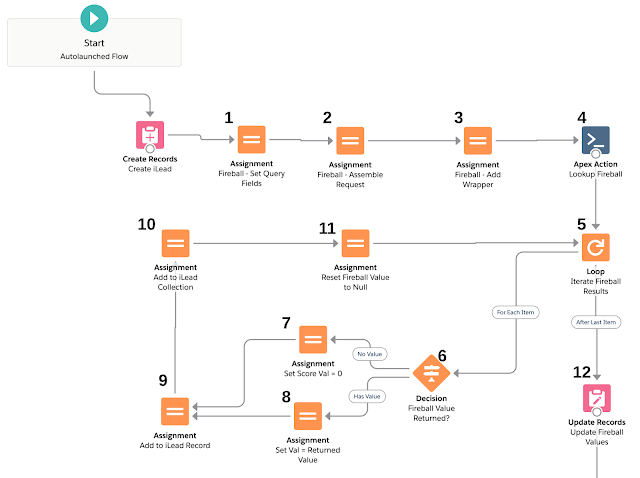 Because custom metadata and Flow don't mix , I had to create a service that would run the custom metadata lookup in Apex, where I can control the bulkification. Code Here is some code that will achieve this. It takes a list of field names and a list of values, and a table name, and returns the value from the lookup. To install the code, open Developer Console, and create four files: FlowLookup FlowLookupRequest FlowLookupResult MyException You can copy/paste the code from Github into those files, then save them. That will make the plugin available to your Flow. Step-By-Step Usage Here's an example that looks up a value called a "fireball" from a custom metadata table and assigns the value to a record called iLead__c. Request and Response Formats The process has a request and a response. The request contains: Query Fields - a list of the fields you want to query Query Values - another list of the values for the above fields Result Field - the field to pull the result
Read more

Bob Hatcher
I've been working building business applications for almost 20 years, with a focus on Salesforce and related technologies like ERP and integration platforms. I hold 14 certifications in Salesforce including Certified Application Architect and Certified System Architect. In past lives I've worked with Dynamics CRM as well, so some older content in this blog focuses on that.